My Movimentum project is currently fast asleep—but in a discussion about railroad barriers, I felt that I needed to explain a certain mechanical linkage with animations. Christmas season is a good time to experiment with new ideas (at least new to me), so I created three "mechanical explanations" for an old Austrian gear that drove (and drives) railroad barriers. You can see the results in that posting (in German). If you are interested in what it explains, just ask here—then I'll give you a quick overview about what this is all about. However, this posting here is really about the tool chain I used to create these animations.

Here is the second animation I made:


Here is an overview of my process. Below, I will share my experiences for each step:
For the record, I work with Windows. However, I think most of this also applies e.g. to Linux.


Most probably, the parts have to be aligned in the animation. For this, it is very useful to add cross hairs as anchor points at critical locations, e.g., at the center of rotating items.

Moreover, to place the anchors at a predictable point, I put each part into a box of equal size, where the anchors are at the same position relative to the left upper box corner. In addition, I create an empty box that contains only the cross hairs of an anchor.

Here is a part of such a drawing. The lower left box is the empty one. 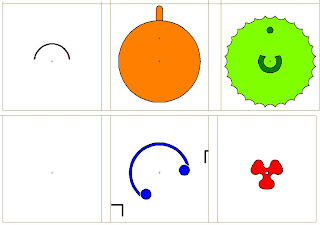 
Instead of snipping the parts images from the CAD program or a PDF rendering, PDFCreator can be installed as a virtual printer that directly creates PNG files (despite its name). This avoids color and other distortions. Currently, I create a single PNG file with all the parts—this is faster than creating a single PNG file per part by printing from the CAD program, because I have to adjust each parts file anyway in the next step.

Already here, I select the correct scaling of the PNG—at least with Caddy++, this is possible in the print dialog. This avoids any later scalings which will destroy the cross hairs of the anchor points.

PDFCreator creates the PNG in portrait orientation even if you "print" in landscape—I do not know whether this is a fault of PDFCreator or Caddy++ or whatever else. In Windows, the created PNG is immediately opened in the Photo Viewer, so it is only a single click to rotate it to the intended orientation.


Using Paint Shop Pro, I select the content of each box in the result and paste each part into a new PNG file. Unfortunately, box selection uses screen coordinates in Paint Shop Pro. Therefore, in the new files, the pasted parts may not lie at perfectly the same relative spot—I consistently got offsets of ±1 for both coordinates. In step 4 I explain how I correct this—but maybe there is a better way ... Because of this correction, I save the parts in files called ...Approx.PNG; the corrected files will have names without Approx.

While I have the new part file open, I make the background transparent, because this is what is needed for stacking the parts in the animation. Also the empty box gets its own "part file" with transparent background.


As explained above, the anchor points of the parts files will not be exactly at the same relative position to the upper left corner. This is a nuisance, as ImageMagick uses the upper left corner as a reference point for its computations, whereas we want to use our anchors. I repair this problem manually as follows:
Here are the concrete steps for this on the command line, using ImageMagick's convert:


Now we come to the central piece: The animation script. The basic idea is that we create a separate ImageMagick convert command for each frame. Each such command will place the parts at specific places. But of course, instead of writing single commands for thousands of frames, I write patterns that contain variables that are expanded many times. The script is then run through an Gnu AWK program that emits the convert commands that compute the frames. Here is the call I use:

I will explain the "script compiler" animate.awk in a separate posting.

Update: During documenting the small compiler, I found I could make the language a little bit terser: The = step definition has been merged into the $ and + commands.


Here is such a command pattern that overlays a Part1 at a fixed place and a Part2 after a rotation and a shift (you can look up convert's options in ImageMagick's documentation):

The variables in this pattern are the strings starting with ! or %:


A complete script consists of script segments where each segment describes a homogeneous movement. Each segment consists of two parts:
Here is an example of such a segment:

5.3. The details of scalar variables


The assignment to a scalar variable has the following form:

name can consist of any characters you like that are not special in regexps (reason: In the AWK script, regexp replacement is used to interpolate the variables).

The three parameters can either be numbers (decimals are ok) or single dots (.). The dot means that the value remains as it was before. This is a central concept that helps to write short scripts. E.g., here is how you move something linearly, then let it stop:

In the second assignment, we left !X at whatever value it had after the first segment completed by specifying initial as . (dot). However, we set the increment to 0, so that this variable does not change its value in the 10 frames of this segment.

The modulus is sometimes useful for angle variables: The replacement value for a pattern is the variable's value modulo the modulus. I needed this because I precomputed rotated images of a part into 360 files called something like Part1_000.PNG, Part1_001.PNG,..., Part1_359.PNG. Each file contained the part rotated by so-and-so many degrees. For rotating the part, I could now write something like

5.4. The details of vector variables

The variable is set and/or incremented as specified. Instead of a number, each argument can again be a single dot, which keeps the current value.

The other form is necessary for rotational movements:

This means that the change to %name is a rotation around %other by the angle specified as the last argument. %other cannot be a dot here (the % is the marker that this form is intended), but the other three values can be numbers or dots. If  %other itself changes, the results are somewhat unpredictable, as the order of variable computations is not defined. If someone has the idea to try this—well, it's on your own risk ...

5.5. The details of commands


There are two possible forms for commands. One is

This creates count instances of command-text. The variables are replaced in each instance, and the result is written to the output. As explained above, long commands can be wrapped with \ at the lines' ends (the \ must actually be the last character on the line—no trailing white space!).

text can be anything your operating systems understands. I have, up to now, only called ImageMagick's convert here. However, one could e.g. write intermediary files and use them later in the frame sequence, e.g. to improve the performance of frame generation (thousands of calls to convert are not that fast ...).

It makes much sense to write the output of commands—especially the created frame images—to a specific output directory, to keep things cleanly separated.

The other command form omits the command-text:

This means that the previous command is to be repeated in this segment. This is a very important concept: It allows one to specify the "model" in a single convert command that places all the parts at various places; and then have this assembly move simply by maniulating variables. One could even argue that a good animation script sets up a model once at the beginning; and then only modifies variables.

In addition to the $ lines, it is possible to switch off the output with

and switch it on at a specific point with

This is very helpful for debugging: It creates a script that will start "later in the animation", so that the script will only compute certain frames that are to be fine-tuned. This is preferable to (and much quicker than) editing the script each time it has been written before running it.


There are two possible forms of comments. One is

The text of such a comment is copied into the output, with a leading comment marker that must be passed to the compiler. This is helpful for debugging, because you can line up the script with the output.

The other form is everything else which is not understood by animation.awk, i.e., every line that does not start with !, %, ~, $, or #. Such lines are simply ignored. I use this feature to embed the script into a text that explains the animations, which will later become a web page. However, one could call this an unfortunate idea (even though it is along the lines of Donald Knuth's Literate Programming).


This is as easy as it gets. You just run it.


At last, ffmpeg is used to create an animation file from the frames. Here is the command line I use:

Of course, you can use other formats than mp4 for your animation (especially if you do not like proprietory formats). For mp4, the -pix_fmt yuv420p is important. The default pixel format, whose name I forgot, is not understood by the majority of programs or web sites out there.

In my next posting, I explain the small compiler (which you can download here).
In a subsequent posting, I will give a few animation examples and some background on why cranks are difficult.